The Big Picture of Mining Electrification 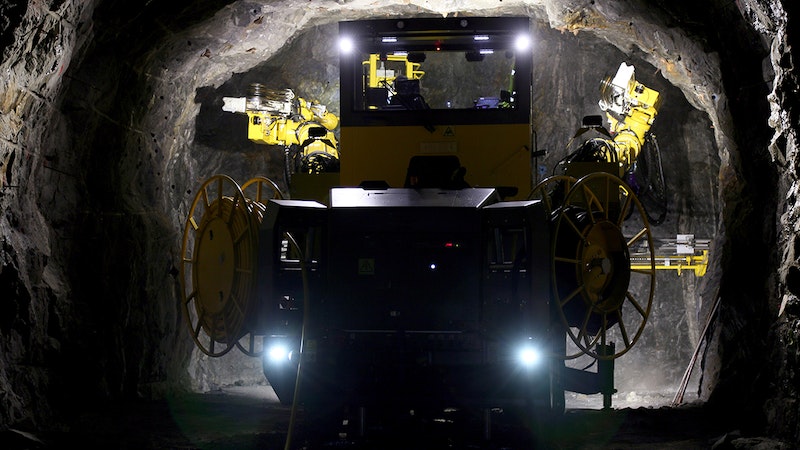 Mining includes about 1000 large mines extracting such things as metal-bearing deposits, diamonds and coal. However, Volvo Group, which makes some of the equipment involved, estimates that there are about 500,000 extraction sites in all. A high proportion of those are concerned with constituents of the ingredient cement and for its resulting products such as concrete and mortar, together the most-used man-made materials on Earth. For these, extraction includes sand, gravel and various other aggregates plus clay, phosphate, gypsum and limestone. See the IDTechEx report, "Concrete and Cement Reinvented: Growing the Market, Decarbonising 2022-2042".
In the big picture, mining is a very large, growing business. Top mining companies net around $660 billion yearly. Glencore alone generated $142 billion in 2020, much of that being commodity trading but also mining of metals and minerals. The growing aggregates business is approaching $500 billion yearly, overlapping a growing cement market in the region of $350 billion yearly. $23 billion LafargeHolkim leads in cement-related activity notably cement, ready-mix concrete, mining and processing of aggregates and "solutions & products".
Industry consolidation is progressing into very large volume players and niche players with fewer prospering in-between. As greater commonality arises, there will be mergers across broader sectors, not just within traditional mining. Drivers are increased economy of scale, reducing emissions, going downstream to increase margins, repurposing of slag heaps, fly ash, metakaolin, silica fume, iron ore tailing, scrap concrete and so on. Sites are themselves becoming larger and more vertically integrated, for example doing more processing and making their own zero-emission wind and solar power. For all of them, 100% electrification and unmanned activity is the end game, driven by economics, health and saving the planet. In Quebec, Canada has the first fully-electric unmanned mine for diamonds kilometers below.

Making and selling mine electricity

Analyst IDTechEx has reported how a large percentage of the above activities are moving to on-site zero-emission electricity production and it has advised that this brings the opportunity to create extra earning streams from selling electricity and long-term delayed electricity. That energy storage currently means around ten hours for solar dead at night and untrustworthy wind power but it will soon include the new market of seasonal storage created by all the solar arriving being feeble in winter. Mine installations beat batteries here. See the IDTechEx report, "Mining Electrification: Vehicles, Generation, Repurposing 2022-2042" for more.
Solar output has been increased by panels being on water such as flooded gravel pits. 120MW is proposed at East Windsor Connecticut, and other pits are already generating. Compressed air storage takes place in mining caverns. Gravity storage and thermal storage use rocks, mineshafts and rail systems up the side of pits, though most are trials or proposals as yet. Pumping heavy liquids up the side of a mine can store as much energy as pumping water alone up a mountain (if you have no mountain) but the important takeaway is that electricity production and storage are a gift to miners wanting to create extra earning streams while reducing emissions.

The battery-electric vehicles are already available and the broad mining industry as IDTechEx describes it needs to buy them more quickly. As with a private car, the total cost of ownership is lower with battery-electric now. That includes battery drills, excavators, loaders, load-haul dumpers, giant dump trucks, even ones delivering rotating premix concrete and Class 8 on-road haulers (2021 USDOE study verifies the economics of the latter). See the IDTechEx report, "Electric Truck Markets 2021-2041". The problem with all these electric vehicles is not supply, but the mining and allied downstream industries adopting them too slowly. Fuel cell vehicles and a hydrogen economy in mining may have a secondary place in due course as discussed in IDTechEx reports such as, "Fuel Cell Electric Vehicles 2022-2042".
Announcements come thick and fast. New Terra EV all-electric tractors have the capacity to power SmithCo Side Dump trailer units with capacities from 50 to 240 tons. Using the same Terra EV base platform to power conventional support units provides an opportunity to completely transform operations to all-electric, according to Terra EV. Pronto Artificial Intelligence Autonomous System can be added. Williams Advanced Engineering in the UK has announced a new partnership with iron ore leader Fortescue Metals Group in Australia to create 240-tonne battery-electric mining haul trucks.

Electric processing equipment can be bought from Keestrack and others. It can be cable fed from your on-site wind and solar power. Zero emissions. The global mining machinery market going electric may reach around $36 billion by 2025. Comminution, the process whereby rocks are crushed, ground and cut into smaller parts, accounts for 56% of the mining sector's total energy usage, making it a major polluter. The process represents 3% of the world's generated electric power usage. Downstream, 70% of the carbon dioxide from cement making is the calcification reaction but alternatives are coming and this is part of a move to mining new things in new places. Cement making and its allied activities are responsible for up to 10% of global warming if you include vehicles and machines from excavation to prefabricated concrete erection.

Some surface mining autonomy has started with over 100 Komatsu and Caterpillar giant dump trucks deployed, initially diesel but moving to electric. In late 2021, Komatsu was trialing a large autonomous water truck, based on its proven Autonomous Haulage System. The technology on this concept HD785-7 truck autonomously controls both the truck's movement and water disbursement through the same platform.

Electrification is the only practicable way of carrying out sea-floor mining and planned mining on the Moon, Mars and asteroids, and - when it is known how to use it - desert sand. Graphenea thinks it has an answer. Battery-electric drones are already widely used in mining sites for surveillance and security. Of course, many mine sites are remote and need air connection and a new development here is battery-electric vertical takeoff aircraft that have a good range because they have wings and indeed, conventional winged aircraft that are battery-electric. About one hundred of the latter have been delivered and order books are around 1000 mainly for fixed-wing. The cost of ownership is a fraction of conventional. The climb rate is faster. Enjoy extreme safety from multiple redundancy of powertrains, no flammable liquids or fuel supply chain, long glide in an emergency, and ballistic parachute. Just eliminating fuel supply chains is precious in mining. See the IDTechEx report, "Manned Electric Aircraft: Smart City and Regional 2021-2041".

Remotely-operated battery-electric underwater vehicles are already used in surveying flooded mines and for the new sea-floor mining. There is sand dredging and seashore cliff mining. However, with rising sea levels and seeking new reserves, more mining-related activity will be located in or near to water. Next up, such mining will have the opportunity to make, store and sell electricity from that water. Open water river and ocean tidal power and wave power need no large structures. Such zero-emission equipment can be easily relocated. An example is the specially-designed boat of Orbital Power Systems generating 2MW while moored in Scotland and doing it with minimal intermittency. There are even forms of underwater energy storage to give delayed electricity. See the IDTechEx report, "Stationary Energy Storage Without Batteries: Grid, Microgrid, UPS, Trackside 2021-2041".
Overall, mining is being electrified, relocated and redefined. Laggards beware.
For the full portfolio of mining related research available from IDTechEx please visit www.IDTechEx.com/research/EV.
IDTechEx guides your strategic business decisions through its Research, Subscription and Consultancy products, helping you profit from emerging technologies. For more information, contact research@IDTechEx.com or visit www.IDTechEx.com.