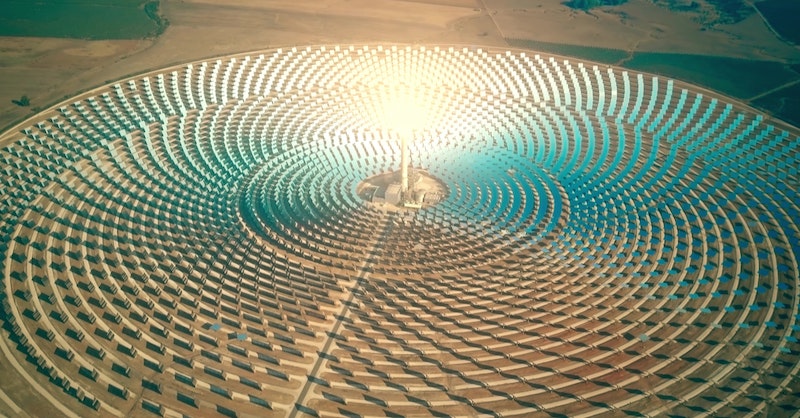 The obvious is not necessarily the ideal. Oil majors with gasoline stations are offering electric-vehicle charging stations. However, electric vehicle ranges will double in only four years and that does not just mean half the number needed per vehicle: many will be able to charge only at home. Yes, there is rapid adoption of electric cars but peak car comes by 2032 at the latest due to mobility as a service and cities banning private cars. For now, there is a rush of demand for chargers but it will flip.
Redundant coal mines and power stations are being covered in regular solar panels but that business is too easy and everyone is piling in, slicing margins. A redundant power station may continue to use its transmission system, avoiding a writeoff, but Raghu Das, CEO of analysts IDTechEx, recommends a more value-added approach.
"Longer term, there is scope for uniques such as using metamaterial layers to keep the panels cool without power or water, applying overlayers of perovskite to generate even more electricity and possibly thermoelectrics to make electricity from solar panel heat. However, solar panels are often better located on lakes, hydro-dam reservoirs, and even at sea."
The overlayers are covered in the IDTechEx report, "Transparent Electronics Materials, Markets 2021-2041". Indeed, many other options are arriving that use more of the skills and assets of oil, gas, and coal majors and repositioning utilities. Energy storage is an extremely promising option and the detail is in the IDTechEx report, "Stationary Energy Storage Without Batteries: Grid, Microgrid, UPS, Trackside 2021-2041".
Thoughtful fossil majors can consider going beyond the obvious of putting a lot of lithium-ion batteries in repurposed power stations to compensate for the chronic intermittency of wind and solar. There are ongoing shortages of lithium-ion due to out-of-synch commissioning of the necessary metal mining. Such batteries have serious issues with toxins, disposal, and even fires every year. 2021 started with several deaths from those at stationary storage facilities and lithium-ion self-leakage makes it poor for day-to-night storage required for solar. Storage and discharge in minutes has already switched to supercapacitors and flywheels but more relevant to fossil majors is the much larger demand for storage for one to several hours and seasonal storage compensating feeble solar in winter.
Das advises, "Redox flow batteries will take half of the longer duration part of that in ten years according to the analysis in IDTechEx report, "Redox Flow Batteries 2021-2031". Liquid air storage that converts back to electricity is also taking initial orders. Both look like chemical facilities. They need the chemical engineering skills and redundant locations of traditional industry, particularly where the existing transmission can be repurposed. Pivoting majors can take the lead in advancing these technologies and other candidates like compressed air in underground voids that convert back to electricity and lifting and dropping heavy weights down abandoned mineshafts to store and generate electricity. With these, we are moving into longer-term storage. Wind turbines can be dead for weeks. Seasonal storage is coming from nowhere to become a very big business."
Indeed, a new front is seasonal storage because of solar becoming cheapest but poor in winter. Lithium-ion batteries majorly self-leak and are totally useless here but building towers of trashed cooling towers and building concrete and dismantling them to make electricity even six months later looks financially viable and virtually non-toxic. Progress these technologies and even wild cards like pumped storage using heavy liquid so hills, not mountains, suffice. New thermoelectrics that viably converts geothermal water to electricity is starting to look promising - silent, fit-and-forget but currently involving toxic metals in non-toxic compounds that would require controlled disposal. Back the research that can make this low cost and clean. Siemens Gamesa hot-rocks storage neatly repurposes old fossil power stations using both the steam turbines and the transmission system for storage up to days and it is best at GW which is what is needed for grids.
The engagement has begun. For example, Baker Hughes Company in GE is one of the world's largest oil field services companies. It is now involved in both thermoelectric geothermal energy development (AltaRock) and a company rolling out liquid-air energy storage at grid size - Highview Power. Highview also has diesel-engine maker MAN Energy Solutions invested and a joint venture installation in Chile with fossil-generator Energía Latina S.A.-Enlasa which is going solar and needs relatively long-term storage. Oil major SABIC is invested in a reflow battery manufacturer EverFlow Energy. Mitsubishi Power has even rebranded to reflect its new concentration on emerging solutions including solar power and redox flow battery grid storage, shedding its fossil fuel past.
For the full portfolio of research available from IDTechEx please visit www.IDTechEx.com/Research.
IDTechEx guides your strategic business decisions through its Research, Subscription and Consultancy products, helping you profit from emerging technologies. For more information, contact research@IDTechEx.com or visit www.IDTechEx.com.